Polyphonic Communities: Ways of Belonging in the Medieval and Early Modern Iberian World

A Two-Day Interdisciplinary Conference for Graduates and Early Career Scholars 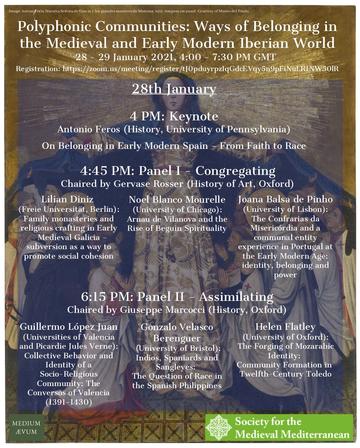 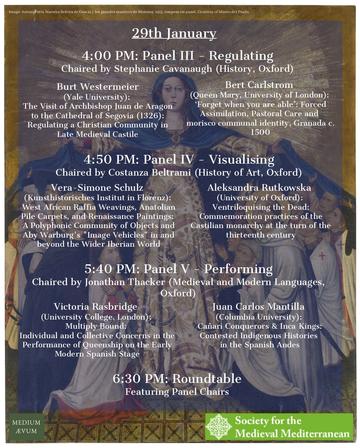 Pre-registration is required to attend. Please click the following link to register: https://zoom.us/meeting/register/tJ0pduyrpzIqGdcEVqy5n9pFiNuLR1NW50lR. After registering you will receive a confirmation email with the details of the Zoom meetings.

In 1520, ordinary people in towns and cities across Spain revolted against the royal government of Carlos V and formed local militia to defend themselves. The rebels were demanding recognition of the rights and privileges of their towns and cities and drawing on deeply held conceptions of their identity as a community. 500 years on from the so-called Guerra de las Comunidades, ideas of belonging and community are just as contested. As world events in 2020 have shown with singular clarity, conflicts over national, regional and ethnic identities are as live today as they were in sixteenth-century Spain. At the same time, adapting to the challenges of a pandemic also presents new opportunities for virtual discussion and online community-making, prompting us to reflect on how intellectual and societal groups alike evolve constantly with the circumstances.

The notion of community has been fundamental for scholars seeking to understand the Iberian past, from questioning the trope of multi-faith “convivencia” in medieval Spain to analysing the richly complex and diverse global empires of early modernity. In 1996, David Nirenberg emphasised the role of violence in forming communities, initiating a scholarly conversation about community construction in the Iberian world. Since then, the academic discussion has moved beyond violence to consider the importance of recovering multiple perspectives on the meaning of community, including those of subaltern groups like converted minorities, indigenous peoples, and slaves.

This scholarly debate provides an opportunity for a hitherto under-utilised interdisciplinary approach by establishing connections between disciplines and including a wider range of source material. In particular, it is essential to foster dialogue and debate between scholars of the medieval and early modern periods, in search of continuities and divergences in the history of community.

By bringing together scholars from a range of disciplines, this conference offers an integrated interdisciplinary approach to challenge the way we think about community in the Iberian world. Our aim is not only to rethink the different meanings of belonging in the medieval and early modern Iberian world, but also how scholars reconstruct and identify communities in the past.

The full Conference Programme can be downloaded here. To register to attend, please click the following link: https://zoom.us/meeting/register/tJ0pduyrpzIqGdcEVqy5n9pFiNuLR1NW50lR.

Please contact the convenors by email at iberian@history.ox.ac.uk for more information.